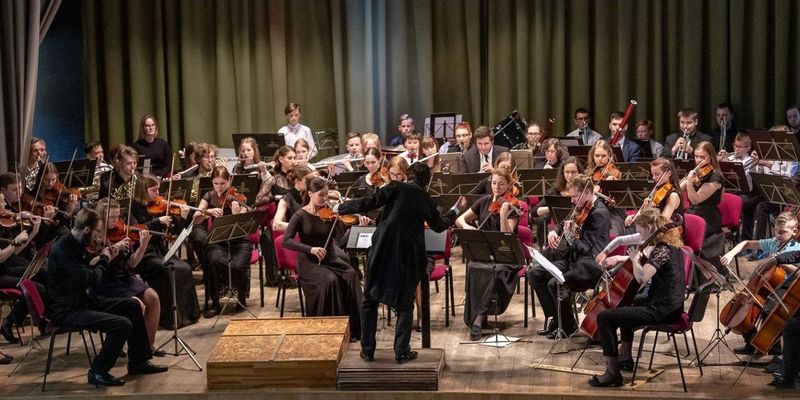 JVLMA Symphony Orchestra (artistic conductor Kaspars Ādamsons, orchestra practice director Jānis Puriņš) has become one of the most artistically compelling and traditional symphony groups in Latvia, even though it experiences regular changes in participants due to the nature of its setting. The group continues to develop the skills which have been cultivated over the decades under Professor Leonid Vigners, Imants Resnis and Andris Vecumnieks, occasionally collaborating with exceptional foreign and local guest conductors such as Lutz Köhler, Leif Segerstam, Rolf Gupta, Karel Marc Chichon, Normunds Šnē, Yalchin Adigezalov, Denis Severin, Ainārs Rubiķis, Lorenzo Della Fonte, Erica J. Neidlinger, Eero Lehtimäki, Josef Wallnig and others.

The orchestra prepares an average of 7 concert programmes a year. Over the last decade the student orchestra has performed numerous State Celebration concerts (at JVLMA, the Great Guild, Ķīpsala Concert Hall), and at regional centres in Latvia – in Liepāja, Rēzekne, Daugavpils, Jelgava, Cēsis, Madona, Gulbene, Kuldīga as well as performing in Lithuania and Estonia. It has been the accompanying orchestra at Stage III of the Jāzeps Vītols International Choral Conductors Competition and frequently cooperates with VSIA Latvijas Koncerti, performing at joint children and youth projects; it took part at the XXIV Nationwide Latvian Song and Dance Celebration in 2008, the World Choir Olympics in 2014 and other significant events in the Latvian concert cycle. The orchestra’s mission is to be not only a group for students of the Instrumental Music and Symphonic Orchestra Conducting study programme, but also a unit that performs concerts and whose artistic activities and quality reaches beyond the realms of the study process.

In August 2016, the JVLMA symphonic orchestra took part in the youth orchestra summer festival Young Euro Classic in Berlin, for the third time. In spring 2017, on the basis of the JVLMA symphonic orchestra, the Baltic Academy Orchestra (BAO) was founded, uniting talented young musicians from the music universities in all three Baltic States. Led by conductor Andris Vecumnieks, from 22nd to 26th April the BAO performed as part of the Latvian centenary celebrations, in Rīga, Vilnius and Tartu. In January 2018, as part of the centenary programme, the BAO went on a concert tour of the Baltic States, Poland and Germany, led by conductors Kristiana Jervi, Gunta Kuzma and Modesta Barkauska. In November 2018, however, the JVLMA symphonic orchestra performed for the project Side by Side in the concert of the Amsterdam Royal Concertgebouw orchestra at the Latvian National Opera and Ballet, conducted by Philippe Herreweghe.